How The Cuban Missile Crisis Almost Stopped My Parent’s Wedding…

As Thanksgiving approaches again, I am looking forward to the story my dad shares each year as we gather around our turkey and stuffing.  This holiday brings up special memories for my father, since it was the day he and my mother married, many years ago.  Since my mother passed away, the story is even more special to hear.  In the retelling, we all get to smile and reflect on a woman who was incredibly special.  We also get to remember a day that almost didn’t happen.  Thanks to a national crises, my parents almost didn’t make it down the aisle.  And had that been the case?  Who knows if my sister and I would be here today!

My parents met on November 10. 1961. My dad, Robert, was a young Navy pilot stationed in Virginia and my mother, Mary Jane, was a nurse living in Jacksonville, Florida.  The fact that they didn’t live anywhere near each other is the first  piece of this puzzle that would need to fall into place to make a wedding happen. 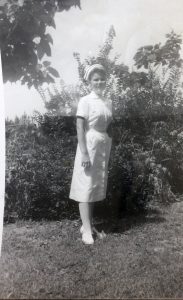 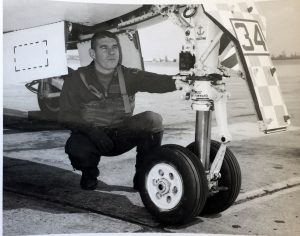 Back to November 10th: my mother was at the Officer’s Club on a date, when my father happened in to the room.  (Fun Fact: my dad was on his way to a Mercury astronaut recovery) Mary Jane was apparently quite taken with my dad, so much so, she ditched the other guy and spent the evening with Robert!  They went to a movie, had a drink and said goodnight.  Now, we could say the rest is history, but that would leave out all the interesting pieces that still need to be placed in this puzzle!

Taking Grandma on a Manhunt….

The next morning, my mother went on a manhunt – with her grandmother in tow.  She knew my dad was going to mass on the base, so she and grandma set out to attend the same service .  Mary Jane already had a feeling about my dad and wanted her grandmother to check him out as well.  After the mass, they offered my father a ride back to where he was staying (which was only about a block away!) and he eagerly got in the car for the short ride.  This piece of the puzzle always makes us laugh.  Imagining my mother with her teeny, tiny, Irish Grandmother, pulling up next to my dad and my mother saying out the window, “Do you want a ride, sailor?”  It ALWAYS makes us laugh.

My father was due to leave the next day for the Mercury astronaut recovery – but due to weather, and perhaps happenstance, the launch was cancelled due to weather.  My dad flew back through Jacksonville where he promptly called my mom and they went out again.  He then headed back to Norfolk, and they wouldn’t see each other again until after the New Year.  This is where the puzzle could have been put back in the box and abandoned, but thankfully, the puzzle stayed put and the pieces kept finding their proper places.

He Knew She Was “The One”

In the spring of 1962, my father made several trips back and forth to Florida to see my mother.  On one flight down, when the weather was exceptionally bad, my dad said a prayer that if he made it to Jacksonville, he knew Mary Jane was the one and he would ask her to marry him.  Well, he did make it to Jacksonville and he did ask her to marry him.  Half the puzzle was now complete! 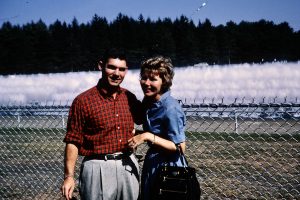 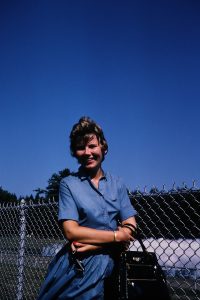 The wedding planning commenced and my dad continued to fly back and forth between Virginia and Florida.  A chaperoned trip to New York also happened so my mother could meet my father’s family in Kingston, NY (grandma chaperoned, of course!) 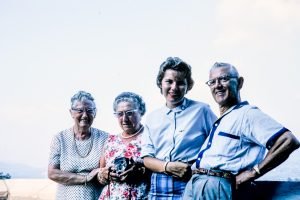 Mary Jane and the Chaperones (Grandma is on the far left!)

Here is where some of the pieces to the puzzle could have gotten lost.  As the wedding date approached, the United States was also inching closer and closer to a conflict with the Soviet Union and Cuba over the placement of missiles on the island nation.  Little did either of my parents know, but this historical event would play a large role in their wedding.

On October 20, 1962, just a month before the big day, my father’s squadron was tasked to immediately deploy to support the United States effort in the Cuban Missile Crises. On his way, Robert landed in Jacksonville and had the opportunity to call Mary Jane to tell her he had no idea of where they were going or when they would be back.  My mother had just mailed the wedding invitations.  Did this mean the puzzle was going to completely come apart?

Not to be deterred, my mother was set on continuing her plans with the faith her wedding would still happen.  That entailed getting the marriage license to my dad and then back to her.  Mary Jane applied for the license and was then able to coordinate with the base Chaplain to get this piece of the puzzle on a plane going South.

Get That License to Robert….

A few days later, my father was was taxiing on the flight line near the tower and an operator asked if any one in his group knew a LTJG Dykes. My father acquired the envelope with the license and discovered pretty much everyone who had handled the paperwork had left a message on the outside.  These messages ranged from “Congratulations” to “Run Away!” and more. Navy pilots could also be a little salty in their language back in 1962.

The next piece of the puzzle was for my father to get a blood test completed. Ordinarily, a blood test would occur in the sanitized space of a clinic.  Not so for my pilot dad on a carrier off the coast of Cuba.  His blood test was done on the flight deck, at night, floating on the Atlantic Ocean!  Post blood draw- my dad hopped back in his aircraft, launched and flew to Guantanomo Bay.  Huge puzzle piece completed and mailed back to Mary Jane!

With the license and blood test taken care of, the next problem was if Robert would even be able to get leave (military vacation) to go to his wedding. At the time there was a “NO Leave” policy on the East Coast. So, when he got back to Norfolk the Saturday before the wedding, he had no idea what was going to happen. Luckily, on Monday the policy was changed to 10% could go on leave, so he left Norfolk that night and drove to Jacksonville arriving on Tuesday for the Thanksgiving Day wedding. My father’s Best Man and ushers were friends from his squadron and were scheduled to fly to Jacksonville on Wednesday. At five o’clock Wednesday my dad got a phone call that they could not make it as their airplane had a mechanical problem and they were stuck in Virginia.

So what to do now?  No ushers, no best man and no one to do the arch of swords, which was a tradition at a Navy wedding. A quarter of the puzzle was coming apart!  Once again, not to be deterred, Mary Jane had a girl friend that was dating a Naval Aviator and so Mary Jane called her.  Her friend then called her boyfriend. The boyfriend then went knocking on doors asking if anyone would like to be in a wedding the next day and by rehearsal time (seven o’clock) they had four of the six ushers they needed. After the rehearsal there was a small party at the Officer’s Club where my father’s father had invited an old friend of his.  Upon hearing the need for another usher,  his wife offered him and they were up to five. Number six was found in a pilot my father had been through flight training with and thus there were now the required number for the arch of swords. The puzzle was almost complete! 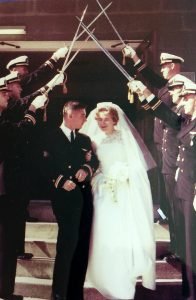 The Arch of Swords – It almost didn’t happen!

Finally, with everyone present and accounted for, Mary Jane and Robert walked down the aisle and completed the puzzle.  The Cuban Missile Crises had not gotten in the way and my parents were off on an adventure that would take them through an almost 50 year marriage and all over the world.  My father always says that God had a big hand in getting them married.  Having surmounted Castro, the Soviets, President Kennedy, and missing ushers, I think my dad was absolutely correct! 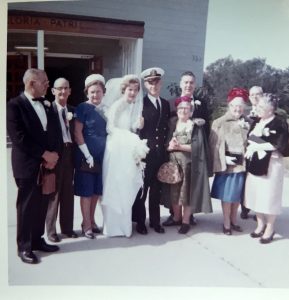 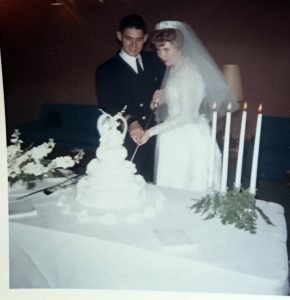