I have already stated that some of the best excursions on a cruise, in my opinion, have to do with animals.  (See my post on The Fortress of the Bear:    )

So when it was offered to visit a musher camp outside of Juneau, I immediately said, “Sign me up!”

Our tour took us to the middle of the rain forest near the capitol of Alaska.  I had not realized there was rain forest in Alaska, but apparently they get so much rain here it is classified as such.  And it was definitely GREEN, and WET, but so beautiful. 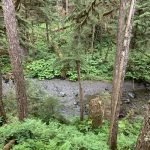 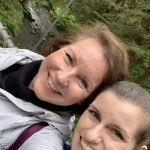 When we arrived at the camp, we were separated into smaller groups and handed over to our musher.  We were assigned to Robert Reddington – it turns out his grandfather is the person who started the Iditarod many years ago and the winner of the Iditarod actually goes home with a trophy of his grandfather in addition to the cash prize.  Robert has run the Iditarod a few times already and is registered for the race again next March.  He was just a super nice guy and clearly LOVES his dogs. 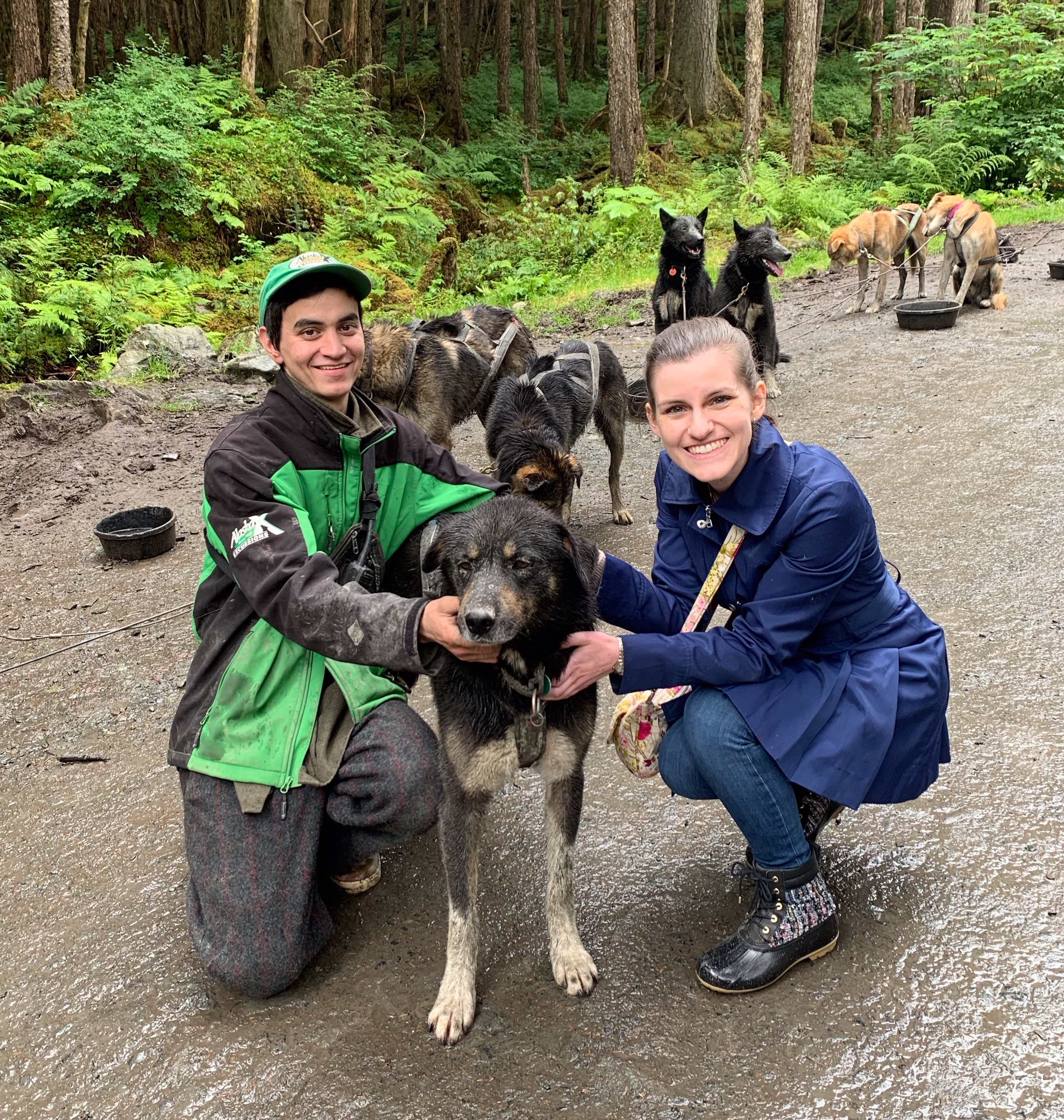 If there is any misconception that these dogs are not handled with the utmost care, get rid of it.  These mushers love these dogs and are all about the dogs health and well being. We were told only dogs who really want to run are put on teams and they are constantly monitored.  It was so clear the dogs love what they do by the massive amount of barking and tail wagging that was taking place once they knew they were going to be running with us trailing behind in the carts. 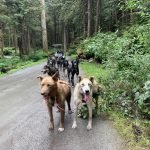 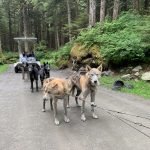 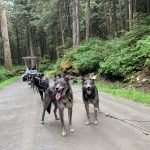 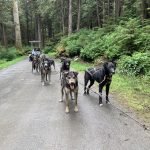 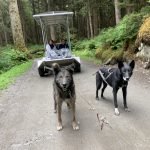 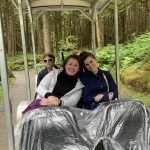 Once our ride began, we observed the dogs also don’t have to run full out. Since there are 16 dogs on a team, they really just pretty much trot to pull the sled/cart. The musher makes sure they get rest and lots of water – since they train to run in very cold temperatures, running in 55-60 degrees is very hot for them.  When we took a break, the dogs knew to sit, rest, take a potty break if needed, and listen for the command to get ready again.  All they need to hear is a very quiet signal from the musher and they know exactly what to do.  It was impressive!   These dogs are just so awesome! 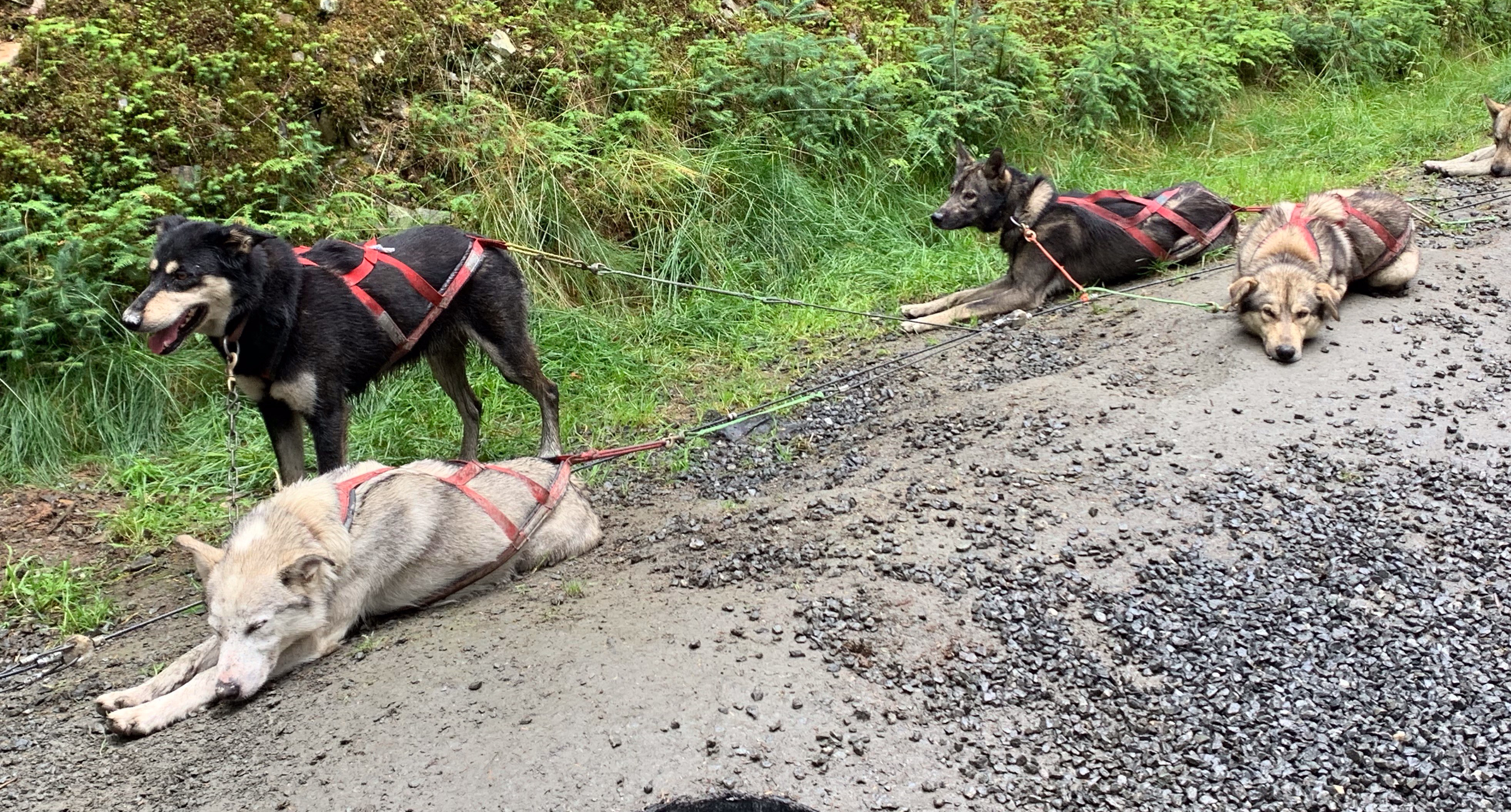 Puppies know when to rest on the trail!

After our ride, we listened to a short talk on the Iditarod and were able to ask questions about the dogs and the race.  We sat in a covered area amongst the trees – it was just breathtaking.  So green and beautiful, with a creek running nearby. One of the retired dogs hung out with us and just wanted belly rubs.  Clearly, Bert, the dog, was living his best retired life! 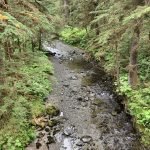 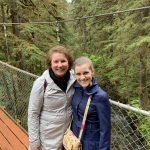 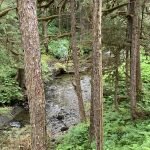 We then got to see the puppies!!!  There were three pups that were about three months old and then a litter of brand new babies, just 9 days old.  the three older pups were full of vim and vigor.  They wrestled and rolled around and were just their cute playful puppy selves.  We also got to hold the babies.  The mom was clearly a little worried as all her babies were handed over to strangers, but what a great way to socialize the puppies.  They got a lot of love from us in the span of 15 minutes! If I could have smuggled one out in my pocket, I would have and I probably wouldn’t have been alone! 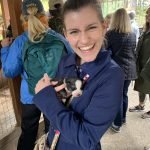 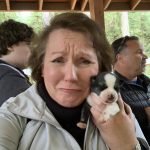 I did not realize Alaskan huskies are basically a conglomeration of all kinds of dog breeds. They have bred huskies, greyhounds, Labradors, setters, etc into the breed to optimize their abilities.  I also learned the females are faster than the males as they are smaller.  A team must end the race with at least 7 dogs or they will be disqualified.  At each checkpoint a veterinarian checks each dog to make sure they are healthy and if not, the dog will be pulled.  I was so impressed with how much care goes into the dogs – almost more than taking care of the humans!

This was a terrific excursion from our cruise.  I would definitely recommend, especially to anyone who loves dogs.  We went back to the ship a little dirtier, with a little dog slobber on our cheeks and hair on our clothing, but what an adventure it was!