Everyone has them.  That event or time from your past that when you remember it, it just gives you all the bad feels.  How do we put these things behind us once and for all?

A Blast From the Past?  Nope.

For the past couple of days I have passed an individual from my past on my morning walk.  I don’t believe this person recognizes me (because let’s face it, when walking, I’m on a mission and I’m generally very dressed down and in pure walking mode.) but I could be wrong.

Passing this person has brought up a lot of very old memories for me.

As a teacher, we all have those years where the class is just challenging.  My colleagues and I used to joke it was an every other year thing.  Every other year was just more challenging.  When I was teaching there was one year in particular that it just seemed like every day was just another horrible experience to get through.  The kids were generally pretty awful and the parents were even worse.

This particular year was fairly early in my teaching career and I still had much to learn.  Looking back, I can recognize I made many mistakes but I know my heart was always with the kids and I tried day after day to provide them the best education and the best of me I could.

Let’s also be clear I was teaching 7th and 8th graders.  Being a 13 year old is not easy and with the early days of social media in full force and most students with a cell phone 24 hours a day, there were many challenges for these kids.

The school year had started out well enough, but as the weeks and months went by things got progressively worse.  The girls especially tried to push every button and test every rule.  The dress code? What dress code?  Heaven help any teacher who tried to call them out on how the code was being broken and they had to follow the rules.

Homework? What homework?  Did homework need to be done?  What was the bid deal if it wasn’t completed?  Gum chewing? Who cared – they’d just continue to stick it under the desks and put another piece in as soon as they left the classroom.  Gossip and  meanness abounded.  There wasn’t a week that went by when one of them wasn’t crying about who was being mean to who and who was saying what and which boy didn’t like them anymore.  All very normal for girls that age.

While you may be thinking these things are trivial and one must choose battles to fight, you are right.  But rules are rules and 13 is a good age to learn that you must follow the rules of an organization.  Following rules helps one become a productive adult.

My mistake was I cared too much.  I did not draw a clear boundary between myself and the kids.  I wanted to help them – to be the person they could count on to listen and provide support during a hard “growing up” time.

This all worked great – until their behavior become so bad they didn’t like the advice I was giving anymore and they didn’t like being called out on their rule breaking.  They especially didn’t being disciplined for anything – even when they were CLEARLY in the wrong.

“You’re Picking on Her”

I remember one interaction with a parent, who I had always gotten along with, regarding their daughter.  The daughter had been called out for chewing gum numerous times and had yet again been caught and this time was going home with a note to the parents regarding such gum chewing.  (You might be thinking – come on! It’s just gum! But let me assure you we had a huge gum problem – under the desks, in the carpet, everywhere – and it was clearly not allowed)

I ran into the parent in the parking lot and in our conversation, I told him that his daughter had been caught again with gum and that she was coming home with a note.  He turned to me and said, “You know, (daughter’s name) says you’re picking on her”.

I’m picking on her for making her follow the rules? This took be aback.

Another parent who I had a great relationship (or so I thought) had been fighting cancer.  I had gone out of my way to be supportive of her daughter.  I checked in constantly and let the girl cry, be angry, whatever she needed to be, as her mother went through her treatment.  This mother and I were also connected through social media.

As the year progressed, this daughter was another one who started to push every envelope of rules.  Yes, she had good reason to express some behavior due to what was happening at home and she got quite a few passes because of it.

Trivial, Maybe. But Rules are Rules

At the end of the year, for our class trip, the girls were given specific instructions on what they were allowed and not allowed to wear for the trip.  Of course, the morning we were due to leave, this girl and all her friends showed up to school not wearing the agreed upon dress code.  They thought they would get away with it because it was the morning of the trip and there was nothing we could do about it.  Well, we made them call their parents and they all had to be brought the correct clothing before we would board the bus.

I remember specifically this particular girls’ mother being so angry she had to come and bring her daughter the right clothes.  But, if she had just followed the rules there would have been no problem.  It became a situation where I was the bad guy because I was making them follow the rules.

It hurt me at the time because I had thought (wrongly) the mom and I were friends.  As soon as the daughter graduated she unfriended me on social media and  I never spoke to her again.  I won’t lie – it burned a little at the time.  It’s never easy when someone “unfriends” you.  It’s like a little slap in the face.  But overall, I really didn’t care that much.  What bothered me is I had always thought we had a great relationship.  I had tried so hard to support her and her daughter through her diagnosis and treatment the best way I could.  I always tried to be kind to both of them, even in disciplining the child on the occasions it had to be done.

Since then, which was years ago – I have never run into either the daughter or the mom.  I don’t give it any thought- it was so long ago and really – who cares at this point?

Then the last few days have happened and I have passed her on the walking trail.  She is with another mom I knew and they walk right by me.  The first day I realized who it was as I was passing them.  The second day, I saw them coming and made the effort to say good morning, as I do to most people I pass on the trail.  She did not acknowledge me either time.

Allowing the Toxic Thoughts to Come In

It’s hard, even as an adult, to not think that after I said good morning, that the two of them walked on and talked about that horrible teacher from middle school who was so mean to her daughter.   I went right back to a negative place in my head, where I have no business going.  There is no way for me to know they did that.  I don’t know that they even know who I was.  And yet, I went right to a place of bashing myself.

I do not have good memories from that year of teaching or of the girls (her daughter included) from that class.  They were mean, childish, nasty girls at the time and the parents were some of the worst I ever dealt with. But, it was a long time ago and I have certainly learned and moved on from there.

Why is it that I went to that negative place?  And how do we keep ourselves from doing that?  This seems to be the million dollar question for so many of us.  Why do we look at ourselves and immediately see the worst, instead of the best, and what can we do about it?

My Steps to Truly Putting a Toxic Event Behind You

First – acknowledge that you have the feelings.

I believe the first step is acknowledging the feelings you are having.  Look them square in the eye and  allow yourself to be ok with the fact that you have hurt feelings and that is ok.

Second – show yourself some kindness.

Third- understand mistakes are made on all sides

The girls in that class were truly mean girls, but they were 13 at the time.  I was certainly not perfect either.  Could I have been a better teacher?  Absolutely.  Could they have been nicer adolescents? Absolutely.  Could their parents have believed a little more that their children were FAR from perfect? Yes. But, I can understand that we were and are all imperfect and that is ok too.

It’s easy to make quick assertions that someone is ignoring you or choosing to not acknowledge you.  Don’t!  You can’t know what is going on in someone else’s head so don’t try.  This is hard.  But just don’t.  Instead, assume the best and move on which leads to….

As Elsa would say – Let it go!  Once you’ve processed through, just let it go.  You don’t need to hold on to any kind of bad feeling or memory.  It’s just not worth it.

Now, all this being said, I’m sure there are some things in your past that don’t lend themselves to a simplistic solution.  Remember, there are people available to help you.  Don’t be afraid to reach out.  Seek a therapist, talk to a professional.  You don’t have to handle everything on your own.

And one last thing …

You are enough and you are special!  The person you are has so much to offer the world.  You are exactly where you are supposed to be right now.  Look in the mirror and see the beautiful person you are.  You are so loved. 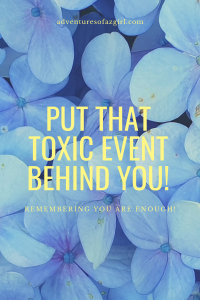 Previous Post: « The Resolution You Need to Make for 2021
Next Post: The Ultimate Break Up Playlist – You Are a Fighter! »